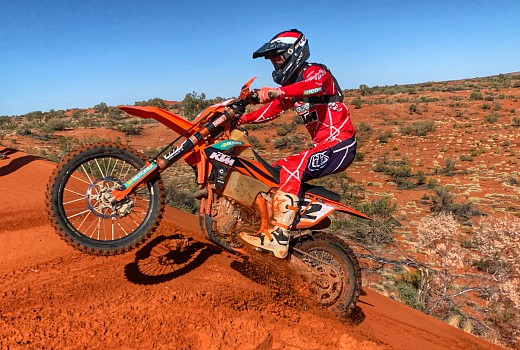 ABC ME has announced a new motocross drama series MaveriX to be filmed in Alice Springs in 2021.

The 10 part series centres on a group of junior motocross riders who are selected for the first ever MaveriX Academy in Alice Springs, the home of dirtbike racing in Australia. It will follow six teens as the program pushes them to their limits, and ultimately gives them the chance to join a professional racing team.

MaveriX is produced by Brindle Films’ Rachel Clements and Trisha Morton-Thomas who collaborated on Finke: There and Back, and is written by Sam Meikle (Wakefield), Fin Edquist (100% Wolf), Michelle Offen (East West 101) and Kelly Schilling (Two Twisted). The executive producers are Bernadette O’Mahony and creators Rachel Clements, Sam Meikle and Isaac Elliott.

Libbie Doherty, ABC’s Head of Children’s Production said, “We are pleased to announce MaveriX, a big, audacious ABC ME series that will sit alongside our other award-winning shows like Mustangs FC and The Unlisted. A wall-to-wall high-octane motocross adventure, made for the upper end of the ABC ME audience, the series is an ambitious contemporary action drama. Shot in the distinctive heart of Australia, Alice Springs, and featuring a rich culturally diverse cast that reflects our multicultural ABC ME audience, we believe that MaveriX will grab hold of our audience’s imaginations from the very first frame and never let go.”

Sally Caplan, Head of Content, Screen Australia said, “This is an original drama that will captivate young audiences with an action-packed story that also showcases the stunning landscapes of the Northern Territory. We are proud to support the experienced Brindle Films along with local creatives to bring this adventurous teen series to life.”

Jennie Hughes, Director, Screen Territory said, “Screen Territory is delighted to work with Brindle Films on MaveriX. This high-adrenaline series will capture the imaginations of young audiences throughout the nation and around the globe. The ongoing economic benefits of this production signify a game changer for the town of Alice Springs and the broader Territory, and a turning point in positioning the NT as the place to create exceptional, distinctive stories the likes of which can be seen nowhere else. Australian children’s television remains as important as ever, beloved not only in allowing kids to see themselves reflected on screen, but it is also Australia’s best-selling and most successful content export; sought after internationally and attracting fresh audiences with every new generation.”

Jenny Buckland, CEO Australian Children’s Television Foundation said, “The ACTF was immediately captivated by this story when Brindle Films pitched us the concept three years ago. Children all over Australia – indeed the world – are going to be drawn into the stories and the dramatic Alice Springs and red centre region, which are the perfect backdrop to the high energy adventures in MaveriX.”

Kate Croser, CEO, South Australian Film Corporation said, “The SAFC is proud to support this new series which will provide great opportunities for crew and talent in both South Australia and the Northern Territory, generate welcome post-production work in SA, and further cement the valuable working relationship between screen creatives in both regions.”

Netflix will have rights outside Australia.

Production credit:
MaveriX is a Brindle Films production for the ABC. Major production investment from Screen Australia in association with the ABC and Screen Territory. Financed with support from the Australian Children’s Television Foundation and the South Australian Film Corporation.