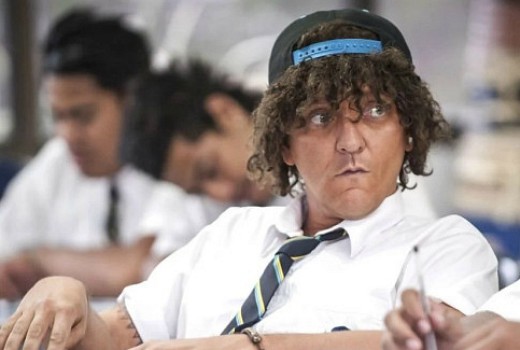 Back in 2008 I noted an ABC documentary Our Boys (broadcast in 2004) may have been the inspiration for Chris Lilley’s Jonah character, which first appeared in the acclaimed Summer Heights High (2007).

Follows the lives of students and teachers at Canterbury Boys High. This week we meet Filipe Mahe, a cheeky, disruptive 15-year-old from Tonga who has slipped through the net – he’s made it into Year 9 without being able to read or write.

Filipe Mahe, now 33, has told the Sydney Morning Herald, “I knew from that episode Jonah was me.

“I’ve always thought it was racism to Tongans but never spoke out,” he said. “I would have been labelled a ‘sook’ or ‘can’t handle the banter’ so I didn’t say anything.”

He added, “Young Tongan boys have been stereotyped as dumb, clowns, a nuisance, little shits, violent and foul-mouthed.

“I feel like I’m responsible for this stereotype and that hurts the most.”

In earlier interviews Lilley maintained visiting a number of schools to research Summer Heights High. The character went on to star in his own series, Jonah from Tonga.

But filmmaker Kerry Brewster, who made Our Boys, also maintains the character had a detrimental affect on the young Filipe.

“Our Boys lifted its subjects up, showing their complicated real selves,” she said. “For Filipe, who was a vulnerable child, it took courage and enormous trust.

“He paid a terrible price when Lilley exploited him, even if he just meant it for comic effect, to create the derisive brown-face caricature. Its mocking portrayal of Jonah was racist and cruel.”

She has also written an opinion piece for the Sydney Morning Herald:

After Our Boys was broadcast in 2004, Lilley was given access to the school to research his new project for the ABC, Summer Heights High. He sat anonymously for a day or two at the back of classrooms, with his hoodie up.

In 2007, a year after Filipe had left Canterbury Boys, the school’s Islander students tuned in to Summer Heights High. At the end of the first episode they were uncomfortable. The second episode clinched it. They were mortified, the school was embarrassed and its teachers furious.

The boys stopped watching or talking about the new TV show that entrenched Lilley’s reputation as comedic genius. I did the same. I had recognised scenes. Some of Jonah’s lines were close to word for word. But they’d been twisted against the real boy. My co-producer, Andrea Lang, shared my alarm that a vulnerable child had been used to create a national figure of fun.

Netflix has removed Angry Boys, Summer Heights High, We Can Be Heroes, and Jonah From Tonga from circulation but Ja’mie Private School Girl and Lunatics remain.

Princess Pictures, which made Lilley’s comedies, has not responded to enquiries.